Originally launched in 1972, The Technics 1200 series became one of the most popular turntables ever, among audiophiles and DJs alike. Amassing over 3 million sales, the original Technics 1200’s are widely regarded as the most durable and reliable turntables ever produced. Mentioned in countless hit songs and even garnering popular nicknames such as “Tech 12’s”, “the 1’s and 2’s” and the “Wheels of Steel”.

So it was no surprise the DJing world went into a frenzy when Technics announced they were wrapping up the production of the popular turntable in 2010. But nevertheless, DJing continued and the music was still played.

Now, 9 years on; the Technics SL-1200 is back, and the announcement set the DJ world on fire. Remaining such a highly acclaimed turntable by DJs worldwide, the new MK7 is sure to attract some attention. But what’s new in the latest rendition of the Technics 1200? Is it still the best turntable you can buy? And how does it stack up with the rest?

In this article, we take an in-depth look at the SL-1200 MK7, and how it compares to the latest release from Reloop; The RP8000 MK2. A DJ turntable that Reloop themselves are calling “The most advanced DJ Turntable ever made” – and we believe them! 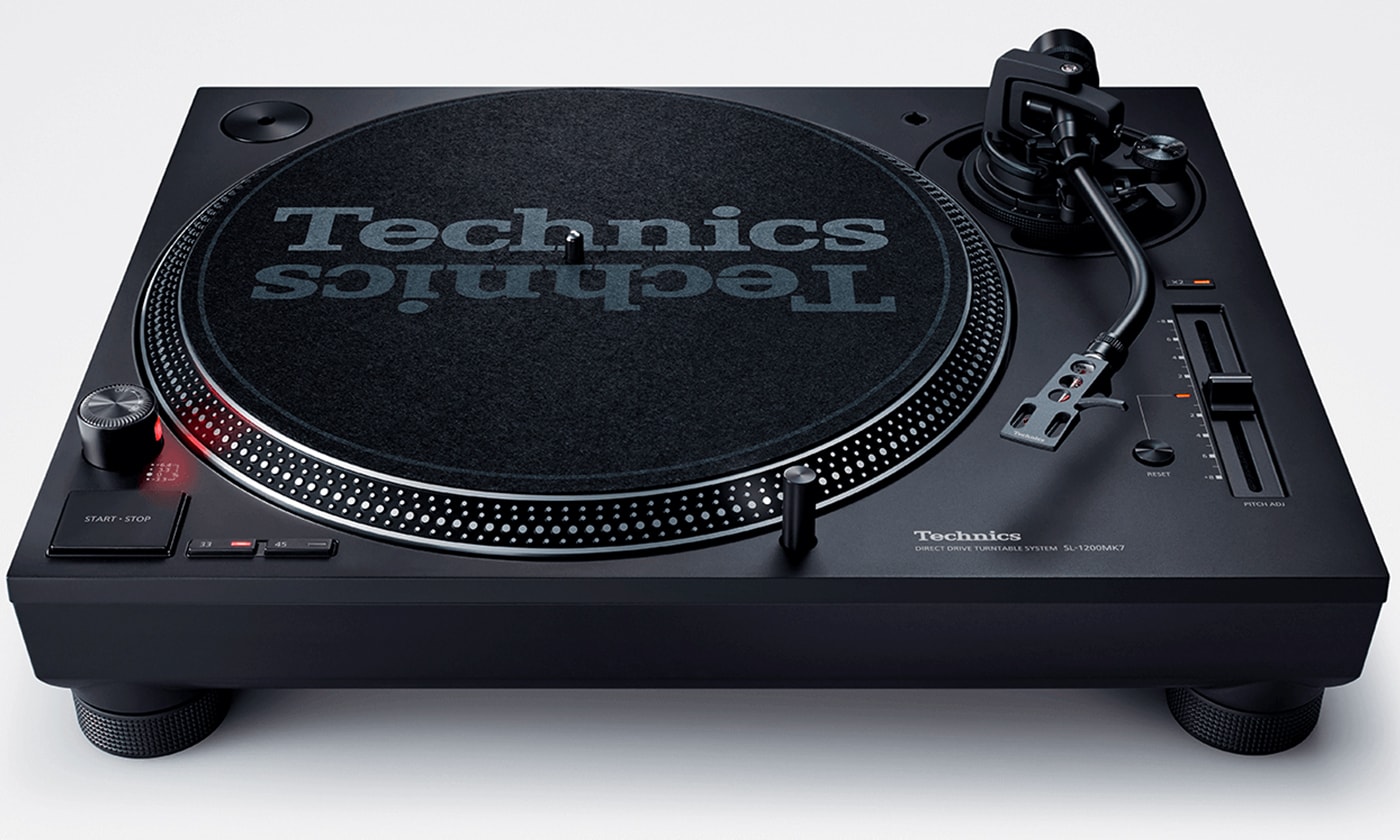 Although it’s been 10 years since the MK6 release of the 1200s, the design of the Technics SL1210 MK7 seemingly has not changed. If you know anything about the original Technics turntables, the MK7 will look immediately familiar. Sporting the original S-shaped tonearm, as well as a familiar button layout. Visually, it looks great. And the only major difference in design seems to be the sleek, matte black finish. Rather than the classic silver.

However, when it comes to its build quality, there are some differences worth mentioning. Firstly, the new SL1210 MK7 is made in Malaysia. Whereas the original Technics 1200 turntables, and all the other high-end decks for that matter, are produced in Japan. And by all accounts, it just doesn’t feel as solid as its original counterpart. Lacking the indestructible response and feel that you’d expect from a Technics turntable.

Additionally, the aluminum die-cast chassis is integrated with “special material consisting of ABS mixed with glass fibre”. Opposed to the aluminum and BMC that you’ll commonly find on premium turntables. Weighing in at a mere 9.6kg, the MK7 is significantly lighter than the MK6 (11.6kg). Inside the Technics SL1210 MK7, you’ll find a new, coreless direct-drive motor. Removing the iron core in a bid to eliminate cogging and maintain smooth rotation.

When it comes to features, Technics decided not to add too many changes to the SL1210 mk7. However, there are a few additions we should mention. First off is Reverse Play, allowing you to hold down one of the speed buttons and then tap start/stop; which will then reverse the direction of the record.

Additionally, removing the platter allows you to access some switches that Technics have buried within the turntable. Such as changing the colour of the LED from Red to Blue, and adjusting torque speed. However, with such a complex method for accessing these adjustments, your average DJ is likely never to worry about them.

Finally, detachable RCA and power cables round up the changes when it comes to the SL1210 mk7. But again, these are all features that rival turntables have been offering as standard for years.

With a build-quality that certainly doesn’t feel as robust as previous versions of the Technics turntables. As well as lacking any insurmountable new features. It’s hard to recommend the new Technics SL1210 as a no brainer choice for your new turntable setup. Especially with a retail price that starts from AUD $1599.00.

But how does it hold up against the Reloop RP8000 MK2, which comes in at half the price of the Technics SL1210?

Self-proclaimed by Reloop as “the most advanced DJ turntable ever made” – the RP8000 MK2 definitely packs a punch. Offering a host of impressive features as well as essentially doubling as a MIDI controller.

With the RP8000 mk2, Reloop has re-designed and re-engineered the classic turntable from scratch. With an obsessive attention to detail, Reloop has set out on a mission to creating a turntable that fulfills all the needs of the modern DJ. Building off the success of the original RP8000, this latest rendition has been designed in close cooperation with renowned turntablists.

When it comes to build quality, the Reloop RP8000 MK2 uses a combination of metal, rubber, and synthetic materials. Resulting in a rock-solid chassis that’s more reinforced and heavier than ever before. Giving it an extreme resistance to vibrations caused by heavy bass sounds. Combined with its shock-absorbing feet that help to improve this isolation.

It also boasts one of the best direct-drive motors on the market.

When it comes to features, the Reloop RP8000 mk2 gives you everything you want from the Technics, and more. First and foremost, the addition of the pad section transforms this turntable into an absolute powerhouse for DJs. Designed for seamless integration with Serato DJ Pro, you can use your RP8000 MK2 in a DVS setup and enjoy infinite possibilities. Use the intuitive pads to control over 7 performance modes, as well as 2 user modes. Which can all be custom assigned using your individual preferred functions.

On top of that, it’s also possible to browse through tracks directly from the turntable itself. Then, load them instantly to your preferred deck. Using the Digital display which gives you access to pitch, BPM, scale, key, deck assignment, and firmware settings.

But that’s not all! The RP8000 MK2 also introduces Platter Play. A feature that’s previously only been seen on expensive decks, Platter Play lets you control the pitch of the platter with its pads. Essentially, turning your turntable into a melodic instrument with 22 scales and 34 notes!

Just like the Technics, all cable connections (RCA/mains) are detachable and easy to exchange.

Above all, the RP8000’s feature set represents the perfect balance between a first-class DJ turntable and an innovative modern musical instrument.

Coming in at AUD $799, the Reloop RP8000 MK2 is half the price of the Technics rebirth. Given that it boasts a number of new features that are sure to excite the modern DJ; it’s hard to see how you could go wrong with having a set of these impressive turntables in your arsenal.

While the announcement of the revamped Technics 1200 series sparked excitement and conversation among DJs worldwide. It didn’t really break any new ground. Being out of the game for 10 years, the only major advancements that Technics have brought to the table have been offered by other turntable manufacturers for years. Including the detachable RCA cables, Digital Pitch Adjust, Reverse Mode and the Improved Motor (that was never an issue to begin with). All of which are present and thriving within the RP8000 MK2. Not to mention the fact that the new offering is produced in Malaysia rather than in Japan.

All in all, we’re sure the SL1210 MK7 will be a great turntable, and we’ve got to acknowledge the fact that the 1200 series will always have its place among die-hard Technics fans. But, is it the be-all and end-all when choosing a turntable in 2019? Not if Reloop has anything to say about it.

Not only does the RP8000 MK2 come in at half the price, but it also boasts incredible new features that the Technics decks simply can’t match. With Serato DJ Support, the 8 RGB Pads, and its rock-solid build. So if we had to choose a turntable for the modern DJ heading into 2020; we’d definitely go with the Reloop, and it seems to be the general consensus among many pro DJs!