What is the best audio format? Which one should you be using as a DJ? These are just some of the questions that have been heavily debated since the inception of digital audio formats. But at the end of the day, the answers are completely subjective, and the one that’s best for you will come down to a variety of factors.

Still, as a DJ we think it’s important to understand the basics when it comes to audio formats. In this guide, we give you a straightforward break down on the main things you need to consider, including which ones sound better and how much space they require. So the next time you’re downloading new music for your DJ set, you know exactly which format is going to suit you best. And even more importantly, which ones to avoid! 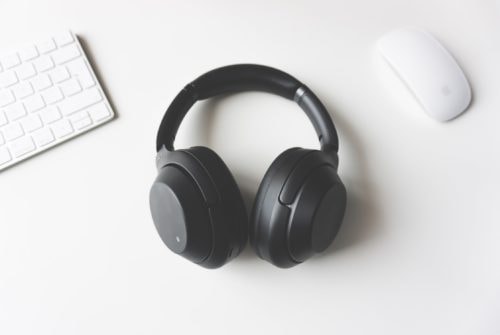 Lossy vs Lossless audio is the first comparison to cover in this guide. You’ll find that Lossy audio is definitely the more common and widely used type of audio-format, but is not necessarily the best for you. This is because the notorious MP3 filetype falls into this category.

In a nutshell, Lossy audio has got little bits missing from it, in order to compress the file and make it smaller. Using special algorithms to remove the bits of musical data from the song that shouldn’t matter too much to your listening experience. And to the untrained ear, many people couldn’t tell the difference with a high-quality lossy file. The trouble begins when these files get compressed too much or you use lower bitrates, losing even more of the sound from the original recordings. It’s then you will really notice the sound difference, and so will the crowd if you decide to throw one of these songs up at your next gig.

So what is lossless audio then?

Lossless audio is a type of format where no musical data has been removed. And you’ll find both compressed, and uncompressed versions of Lossless Audio. Compressed lossless audio gives you a reduced filesize (still nowhere near as small as Lossy audio) but you’ll notice no audible changes to the sound. Whereas an uncompressed lossless file is the straight recording of the original, with no extra compression applied. The benefit of this is you’re getting the highest quality possible, however you pay for this in filesize. Sometimes up to even 6x more than the standard MP3. With much larger files, they’ll take up much more room in storage. In turn, becoming harder to move around when you end up needing to take several external drives to your gigs!

So, now you know the difference between Lossy and Lossless. We’ll go through the most common formats in the game and weigh up the pros and cons of each one.

The most common audio format worldwide would have to be the MP3. Some people, including DJ’s, swear by the MP3 as their go-to filetype. While on the other hand, many also despise it and refuse to use it. MP3’s give you a convenient, compact filetype, usually running under 10mb for your average song. Plus, the ability to embed album artwork and a handful of metadata such as artist and album information. However, the debate gets heated when we start talking about audio quality.

Generally speaking, the higher the bitrate of your Mp3, the better the quality will sound. While some audiophiles believe that even the highest quality Mp3’s sound bad compared to lossless audio, the general consensus is that 320kbps is an acceptable standard, and indistinguishable from the quality you’d get on a CD. Though we’d advise you to think twice before belting out that 192kpbs track you ripped from youtube. That’s when your fans might really notice a difference.

AAC stands for Advanced Audio Coding. This filetype is a close relative of the Mp3 file, however, includes some performance improvements. Using high-frequency encoding that is more efficient (and kind) to your songs than the standard MP3, and will perform better at lower bitrates. Meaning a 256kbps AAC file can sound just as good (or sometimes better) than a 320kbps Mp3. As the native lossy format used by Apple, you’ll commonly see these files in music purchased from the iTunes store.

Although not as ubiquitous as the MP3, AAC should be compatible with all your DJ Software. And listening tests prove there is a small but noticeable improvement in the sound quality. So it’s something to consider using next time you’re converting your tracks from a lossless format or purchasing new music for your next set.

Vorbis is an open-source audio compression format. Vorbis files (.ogg extension) compress to a smaller size than MP3, reducing bandwidth and storage requirements. According to many, a Vorbis file provides better sound quality than a file of the same size in MP3. Although compatible with most software, Vorbis still quite an uncommonly found format.

Wave files with the .wav extension are by far the most commonly found, and universally supported lossless format. Delivering uncompressed sound, you’re going to get immaculate quality. While many DJs choose to only use Wave files, there is a couple of downsides. As you’ll find with all uncompressed lossless formats, file sizes are quite large, and roughly 5x the size of a 320kbps Mp3. A few years ago, this may have been a bigger issue. But with recent developments in hard drives and storage technology, it’s now a lot cheaper to have a lot more storage at your fingertips. The other negative being the lack of metadata. Unlike MP3’s and even the uncompressed AIFF files, there’s no room for attaching album artwork or artist information to your wave files. So you’re going to need to be well versed in file organisation if your virtual music crates are going to be filled with Wave files.

To cut it short, AIFF is basically Apples version of Wave. Providing you with the same high standards in sound quality and practically identical file sizes, there is a lot to like. Traditionally you would find that AIFF was not as universally supported, especially on PC’s, but that’s not so much a problem nowadays. With AIFF now supported by most major DJ software. The big plus when it comes to AIFF is that unlike Wave, it does support the embedding of album artwork and metadata. Making it a much more friendly option when it comes to music library organization.

FLAC files are compressed lossless audio. Usually coming in at about half the size of a Wave file, with no noticeable loss in quality from the original. Plus, the ability to add cover art and metadata to your tracks, giving you access to a whole lot more information at your fingertips. FLAC files are quite popular amongst audiophiles and some DJ’s, while they’re also supported by most DJ Software. Making it a great option to consider next time you’re looking for music. The only downside is if you use iTunes to manage your library, FLAC is unfortunately not supported.

Apples Lossless filetype basically runs neck and neck with FLAC. Both in terms of audio quality and filesize. And although you’ll find ALAC is naturally supported by iTunes and all your favourite DJ software, it’s also less prominently found on digital music shops as opposed to FLAC. Meaning it’s not always a viable option to keeping all your tracks in this format.

So Which One’s Best?

Audio formats are a controversial subject, and similarly to the MAC vs PC debate, many people have a preferred format they’re not willing to stray from. Which is why it’s near impossible to name an outright winner, as they all have their pro’s and cons. While many DJ’s and Audiophiles claim to be able to spot the difference between even the highest quality formats, research shows that it’s not that easy for your average listener.

So I urge you to use what works best for you and make sure you put your ear to good use. If it sounds bad to you, it’s probably time to upgrade your files.

Personally, I find using 320kbps Mp3 files a great option. The best quality of the lossy formats, with embedded meta-data and an extremely small file size. Meaning these files are versatile, easily and quickly moved around, plus easy to organize in your music library. Perfect for portable DJ’s. When creating or producing music, however, I like to keep everything in Wave format. This way I’m dealing with the highest uncompressed quality, with the option to compress down to other formats if and when the need arises.

So which format do you use? Can you hear the difference between high-quality mp3s and waves? Or do you live life on the edge and DJ with 192k mp3s and YouTube rips? Let us know!