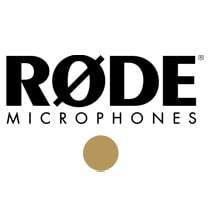 The RODE Wireless GO II gives you an ultra-compact, extremely versatile wireless microphone system with a dual-channel receiver and two transmitters. Each transmitter acts as a clip-on high-quality microphone for completely wireless operation. However, you can always use them as a belt pack with an external lavalier mic. So you’re able to get crystal-clear audio for any type of content creation!

On top of that, the Wireless GO II boasts a number of powerful features. Including universal compatibility with cameras, mobile devices, and computers. As well as an extended range of up to 200m line of sight. Not to mention, improved transmission stability, onboard recording capabilities, and so much more.

Taking versatility to new heights, the Wireless GO II features a 3.5mm TRS output for plugging into cameras. As well as a digital audio output via USB-C for connecting to smartphones, tablets, and computers. So it’s perfectly suited to content creators, filmmakers, on-camera, or on-stage presentations. As well as vlogging, live streaming, and more.

It also features onboard recording so you’ll never have to worry about dropouts or audio issues again. While the flexible gain control lets you precisely tailor the output to your device. You’ve also got the option to record each channel separately or combine the two. So you get the ultimate flexibility in post-production.

Sporting the same pocket size as the original, the Wireless GO II transmitters and receiver weigh less than 32grams. So they take up virtually zero space in your camera bag or backpack. It even comes complete with a handy carry case to keep everything tidy and secure. Thanks to its unique clip design, the Wireless GO II is quick and easy to mount onto clothing or a cold camera shoe; mobile camera rig; boom pole; or cold shoe accessory.

Delivering professional-quality sound while incredibly easy to use, you’ll love the Wireless GO II. Both transmitters and receivers come auto-paired so you’ll enjoy a seamless set-up every time. While it’s Series IV 2.4GHz digital transmission and 128-bit encryption deliver a range of up to 200M (line of sight). Its also optimised for stable operation in areas with a high level of RF activity. Including dense urban environments, shopping malls, universities, convention centres and offices.