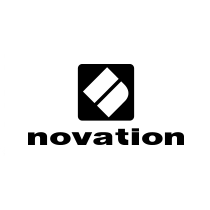 The Novation MiniNova is the powerful 37-key little brother to the popular UltraNova synthesizer. The Mini Nova features a very user friendly interface with over 256 different synth sounds, 4 assignable oscillators, filters, and more. Perfect for live and studio applications.

The Novation MiniNova is a compact synthesizer for the studio and live performances. Sporting the same sound engine as its big brother, the Novation UltraNova.  Featuring 256 incredible onboard sounds, the Novation MiniNova allows you to tweak them to your heart’s content. Using 5-tweakable knobs, an 8-animate button for totally warped effects. Plus, up to 18 voices boasting as many as 5 synth effects for each sound.

Not only does the Novation MiniNova feature an onboard VocalTune effect, but it’s also a classic Vocoder. Allowing you to recreate iconic vocal sounds from Hip Hop and Electronic music. What’s more, MiniNova boasts an incredibly powerful sound engine with synth effects; previously unheard of in a micro synth!

Choose from 14 conventional waveforms (square, sine, sawtooth, pulse, triangle and combinations). As well as 36 wavetables and 20 digital waveforms. While each of the MiniNova’s three oscillators has density and detune features; so you can fatten up your sounds. And virtual sync and hardness act as an additional lowpass filter.

Additionally, you’ll find 14 filter types, 6 envelope generators, 3 LFOs, and 20 modulation slots. So you can link modules of the synth together to carefully shape your sound. The Novation MiniNova can add up to 5 effects to each sound, including; distortion, reverb, chorus/phase, delay, compressor, EQ, and Novation’s unique gator effect.

Overall, the Novation MiniNova is a fantastic micro synth to use in the studio, or live on stage.