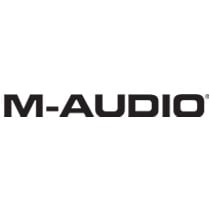 The M-Audio Hammer 88 Pro gives you a full-sized, 88-key, USB-powered MIDI Keyboard controller. Boasting graded hammer action keys, the Hammer 88 Pro opens up a wide world of creativity. After endless feedback from users and artists, the Hammer 88 Pro was built to offer you the ultimate studio or live performance tool. So add the natural piano feeling of the Hammer 88 Pro and take your music production to the next level!

Featuring a convenient OLED screen front and center, the Hammer 88 Pro makes it easier than ever to find sounds, map controls, and mix your sessions. While also allowing you to control any DAW with automatically mapped functions such as Transport, Faders, Pan controls, and more. So whether you’re using Pro Tools, MPC Beats, Cubase, Logic, or any other DAW; simply select the map and Auto-Mapping will do the work for you.

It even maps all the virtual instruments included with the Hammer 88 Pro’s software bundle. Including Hybrid, Velvet, Mini Grand, Xpand!2, Vacuum, Boom, and DB33. These world-class AIR Music Tech plugins can be fully controlled and used in real-time while you create new music.

What’s more, the Hammer 88 Pro features brand new Smart Chord and Smart Scale technology. Opening up your imagination and helping to blend your hardware seamlessly across all 88 keys. Creating music on your computer has never been so intuitive and inspiring!

Activate Smart Chord, and a single key or pad will play an entire chord rather than a single note. While Smart Scale lets you set the keybed so only notes in the selected scale are able to be played. Choose from up to 16 different scale variations.

You also get essential tools for modern production built right into your Hammer 88 Pro. Including Note Repeat as well as a built-in Arpeggiator for opening up a world of possibilities.

Finally, the Hammer 88 Pro’s best-in-class 88 graded hammer-action keyboard gives you professional, graded, weighted hammer action. As well as advanced high-speed keybed scanning for an incredibly expressive experience. It also features Channel Aftertouch that allows you to affect the sound of virtual instruments by scanning how much pressure you apply to a key. So you have even more control over the mood, dynamics, and emotion you want to deliver in your music..

What’s in the box