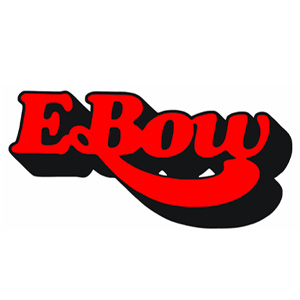 The EBow gives you a handheld and electronic bow for your guitar. Housed in a small battery-powered unit, the EBow replaces the pick in your right hand and lets you mimic strings, horns, and woodwind with unbelievable sensitivity.

The EBow gives you a handheld and electronic bow for your guitar. Housed in a small battery-powered unit, the EBow replaces the pick in your right hand and lets you mimic strings, horns, and woodwind with unbelievable sensitivity. Producing a powerful infinite sustain, the EBow is rich in harmonics and incredible for guitar sounds. Unlike using plug-in effects, the Energy Bow works directly on the string itself with Direct String Synthesis. So infinite Sustain is only the beginning!

You can use the EBow to produce a variety of sounds that are not usually playable on an electric guitar. These sounds are created thanks to a string driver getting its input signal from an internal pickup working just like a guitar pickup. Then its output signal is amplified and drives the other coil amplifying string vibrations. As a result, the feedback loop means you’re able to create a continuous string vibration.