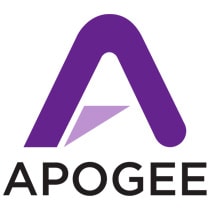 The Apogee Ensemble Thunderbolt is a 30×34 I/O Audio Interface for Mac. Building upon the already high reputation for high-gain preamplifier designs; Apogee improves upon their transparent AD to DA conversion with the addition of an ultra-low latency 1.1ms (96 kHz / 32 buffer) 32-bit playback Thunderbolt signal path.

Buy it now, up to 6 months interest-free
Available at any of our 6 store locations. Find out how
Discontinued Products

The Apogee Ensemble Thunderbolt is a 30×34 I/O Audio Interface for Mac. Building upon the already high reputation for high-gain preamplifier designs; Apogee improves upon their transparent AD to DA conversion with the addition of an ultra-low latency 1.1ms (96 kHz / 32 buffer) 32-bit playback Thunderbolt signal path.

In regards to inputs, the 1U rack-mountable Ensemble Thunderbolt interface features 8 microphone preamps – 4 rear-panel XLR-3F connectors, and 4 rear-panel 1/4″ TRS/XLR-3F combo connectors. Including line-level Input channels 1 and 2, as well as 1/4″ send and return loops. Additionally, the Ensemble inputs include FET-based Soft-Limiting; which can be enabled within the Apogee Control Software. Working to prevent clipping by instantaneously rounding off transient peaks before hitting the analog-to-digital converter. Allowing more decibels of level to be recorded while subtly providing an analog warmth to the sound.

The Apogee Ensemble Thunderbolt’s software driver utilizes a Direct Memory Access (DMA) engine residing in the Ensembles hardware logic chip. Efficiently reading and writing data directly to your Mac’s memory. Since this happens independent of your Mac’s CPU, it doesn’t run out of resources. Allowing the driver to crunch an enormous amount of data at blazing speeds.

Ensemble Converters provide exceptional-sounding audio, whether going in or coming out

Receiving a significant upgrade over its predecessor, the Apogee Ensembles A/D conversion gives you an even greater dynamic range. As well as lower distortion and an almost non-existent noise level. However, the icing on the cake is the inclusion of ESS Sabre32 32-bit Hyperstream D/A converter with Jitter Eliminator. Providing you with an unbelievable clear, and jitter-free audio playback.

Featuring eight uniquely-designed mic preamps, the Ensemble Thunderbolt utilizes Apogee’s Advanced Stepped Gain Architecture. Using a dynamically-optimized circuit giving you superior bandwidth, ultra-low noise, and nonexistent distortion; for up to 75dB of clean, useable gain. So whether you mic up a manic drummer’s kit, record a dynamic vocalist, or capture delicate orchestral instruments. These pristine preamps will ensure your recordings retain all of the focus, intricate detail, and 3-dimensional impact of the original performance.

The Apogee Ensemble Thunderbolt gives you so much I/O, you’ll never find yourself coming up short, regardless of how you work. Featuring four combo inputs and 4 XLR inputs, letting you connect up to eight microphones, external mic preamps, or any other pieces of analog gear. You also get ten highly-configurable balanced line outputs (2 balanced monitor outputs and eight balanced line outputs) that are designed to accommodate a wide variety of workflows. Whether you mix in-the-box or on an external console, the Ensemble Thunderbolt makes it easy to get to work quickly and efficiently.